Exclusive Interview: Laura Pieri Talks Relaunch of “I Will Follow You” 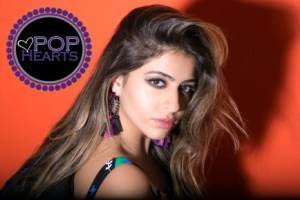 I recently had the opportunity to talk with the super talented, Laura Pieri. She was born and raised in Brazil, but is taking her music talent to the U.S. after being discovered by Grammy Award Winning Producer, Cory Rooney. We talked about her powerful decision to take out the guns in her recent music video, “I Will Follow You,” her musical inspirations, and her double life as an NYU student. Learn more about this Brazilian beauty below!

Your decision to take out the guns as weapons in your recent music video, “I Will Follow You,” was an amazing move in you taking a stand for gun control. Could you elaborate more on this powerful stance?

When I first put the video out, there was a story and a purpose for why we put out the video. But after recent events and what happened in Florida, I did not want to be romanticizing a bolster that I do not participate in and not belong in. I do not want to be romanticizing gun violence because it is such a serious issue. And if that means I have to start over, then so be it. I decided it was best to take it all down and reassess the message that I want to send out.

Could you tell us what the song, “I Will Follow You” means to you? What was the inspiration behind the song?

After the video was taken down and then rereleased, it has a different message to me. So, when I like someone, I really like someone. I am a Gemini, so when I like them, I really like them. So the song is about when you find that someone and you’re so in love, you’re willing to follow that person wherever they go. So the original inspiration was that kind of love or die relationship, that is not all that healthy, but in the moment it is. Moving forward, it was really how you move on. How you are willing to hold their hand and when you step forward, you know there is a floor under you.

You were discovered by Grammy Award winning producer, Cory Rooney, what was that moment like? And how has your life changed since then?

It is still surreal, some things you just don’t make sense of no matter how hard you think about it. Someone in common introduced us, and then once we got in the studio and started working together, I can’t even explain it. To have someone so acclaimed and knowledgeable on the subject…he is so ready to teach. When I met him, I did not how to produce music or go about it, and he took the time to teach me the ropes. He teaches me a lot, he knows when to say yes and he knows when to say no. It is really nice to have such a figure like that take you under his wing.

You have done an incredible job exhibiting that it is never too late to make a change for the better. What other areas in your life or career does this apply to?

Not to be cheesy, but it definitely applies to all areas of my life. I go to NYU, which is not a simple and easy school and I used to be really bad at school. I’m that girl who used to sit in the back of the class and not really do my work. I did realize though how important it was for me to get a higher education, especially given I am the first one in my family to go to college in the U.S.

I took a gap year before I came to the U.S. for school and during that time, you feel like you’re never going to go back to school. But I realized it wasn’t too late for me to go back and go to college. It is never too late to go after anything you want, no matter what it is.

While you’re taking the music industry by storm, you are also a full-time student at NYU. How do you balance both?

For me, I enjoy studying. I have recently discovered it is a passion of mine, but it isn’t easy – there really isn’t much sleep involved. There are a lot of all nighters and emails asking for extensions but it is just time management. If you believe it is something you want to do, you just have to sit down and get it done. There are times where I would much rather sit in the studio or be working. But I have to work on a paper. The hardest part for me is not the time management. It’s switching back and forth between school and music because they are both so drastically different. But going to college has made me a better artist and gives me a much better understanding about the world around me.

Who do you look up to in the music industry as inspiration and why?

A few years later, I went to the “I Am” tour by Beyonce. I still can’t describe what this woman does – how she makes me feel, how she makes my friends feel, how she even makes my mom feel. She just makes everyone feel confident and that was something I really struggled with growing up. It is not easy being a girl in this day and age and I was so inspired by her, along with Shakira. To see someone on TV and think someday I could do that, it is so inspiring.

As a young Latina artist, how do you hope to inspire other Latina girls with the same dream?

That is a hard question, because I don’t even think I know what it means to be Latina. I think a lot of Latina’s also struggle with this concept of what it means. I am Brazilian and I don’t speak Spanish, so a lot of times I feel out of touch with who I relate to, even though I am the closest to them. Women like Shakira and JLo have paved the way for us to follow through with the same dream. And I want to be that for others too.

Do you have any new projects or singles coming up next?

We have recorded many more songs after “I Will Follow You,” but they are all still very secret as we are figuring everything out. There have also been a few opportunities for me to act, but again, it is all very secret.

What is your dream venue to perform at?

What is one thing fans should know about Laura Pieri?

If there was one thing I could say to my fans, it would be I have no clue what I am doing and that is okay. Life is a journey, we don’t have all the answers. I just started in the music industry and all of the fans I have already and all of the support I get, I am so thankful for it all. And that if they don’t know what they’re doing, that is okay.

Be sure to check out her music video, “I Will Follow You” below!