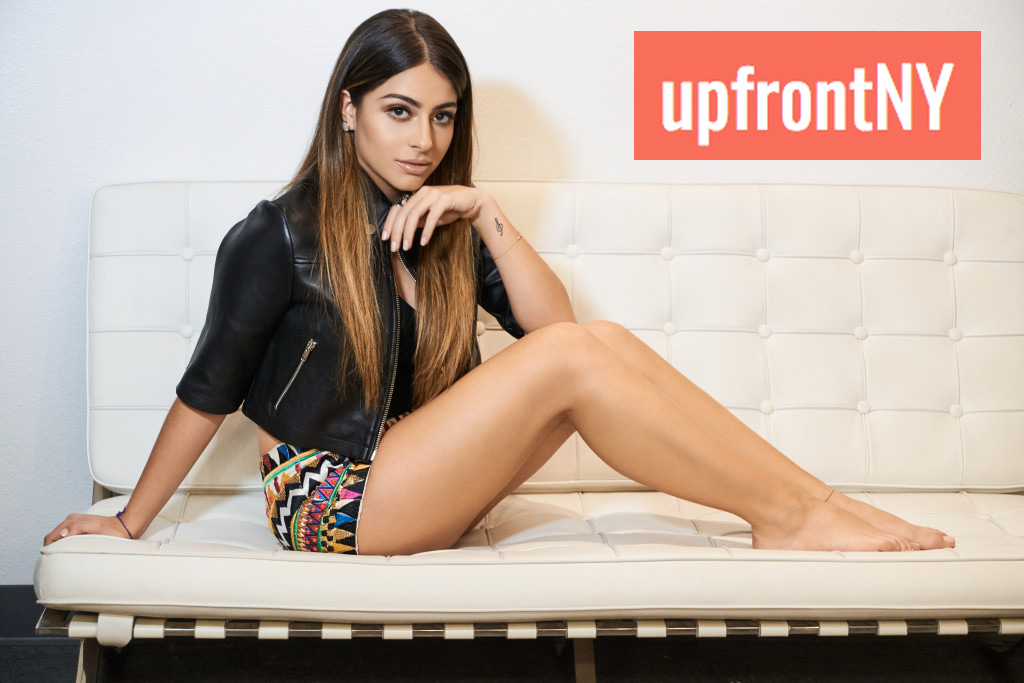 Laura Pieri recently released her single “I Will Follow You” in July. She is from Brazil and was discovered in New York by Grammy Award winning producer and writer, Cory Rooney.

Check out our interview with Laura about music, her new single, and working with Cory!

upfrontNY: When did you develop a love of music?

Laura Pieri: I didn’t really ever develop a love for music. It was something that was always present in my life, ever since I was a little girl. My mom used to sing me songs to sleep and ever since I was a child I used to put on little concerts with my stuffed animals. I’ve really been involved with music ever since I can remember.

upfrontNY: How does music make you feel?

Laura Pieri: Well it depends on the song! That is the most powerful thing about music. It has the power to reach within anyone and communicate with their emotions. When listening to an intense and emotional song, it’s hard not to remember an emotional moment to which the song applies to. The same thing goes to feel-good songs. They just have the power to lift us up.

upfrontNY: Growing up, who were your musical inspirations?

Laura Pieri: This will for sure sound super cliché, but Michael Jackson has been one of my biggest inspirations. He’s the one that got me into believing in music and in myself. When you’re five, everyone says they want to be a singer. I really just never changed my mind. Both JLo and Shakira’s career have impacted me greatly. I can still remember the first time that I saw Shakira on TV and she was dancing and her hair was flawless and I felt like it was something within my reach, I saw a little of myself in seeing her. I would say I definitely hope to follow in their footsteps.

upfrontNY: If you were able to work with any artists who would it be?

Laura Pieri: Oh so many! Lately though, I’ve really been loving Zedd’s new work and would really love to work with him.

upfrontNY: Do you have a favorite song or lyric?

Laura Pieri: I go through different phases and different musical obsessions, but overall there’s only two songs I’ve always, no matter what, been in love with. It would have to be Michael Jackson’s “Keep the Faith” and “They Don’t Really Care About Us.”

upfrontNY: You were discovered in New York by Cory Rooney. What has life been like for you since that happened?

Laura Pieri: It has been crazy. On one side he really has introduced me into the world of music and the world of art, which on its own has been surreal. Getting into the studio for me was like a kid going to Disney. Yet on the other side, he has really made sure I focus on being exactly what I am: a college student who has homework and sometimes should not be staying up past 10pm.

upfrontNY: How has working with Cory Rooney inspired you and your music?

Laura Pieri: It has been a learning experience, more than anything. Instead of telling me what to do, he has really opened up the door of music opportunity and gave me the reigns. As inexperienced as I was, he really made sure to make my voice heard, and that’s what has inspired me the most. It might not be about the ‘what,’ but really about the ‘how.’

upfrontNY: Your single “I Will Follow You” was released this July. Can you tell us about the song?

Laura Pieri: The song is a really upbeat, feel-good kind of song. It’s about being in love and so passionate about it that you’re willing to follow that person anywhere.

upfrontNY: If you had the opportunity to perform in any city, country, or venue where would it be?

Laura Pieri: I’ve always dreamed of performing in my hometown, São Paulo, in Brazil. I’ve seen many icons there and it was watching them that my dream really became.

upfrontNY: What is next for you?

Laura Pieri: I am really excited to share some other projects that are in the works and developing now. Once we reveal them It will be interesting to see the growth between this first project and the ones that follow. There’s a lot to come!

upfrontNY: Is there anything you want others to know about you or your music?

Laura Pieri: I really want people to relate to my music, enjoy it and have fun with it. Music is about bringing people together, and that’s what I want people to feel when they hear my music. Unity!