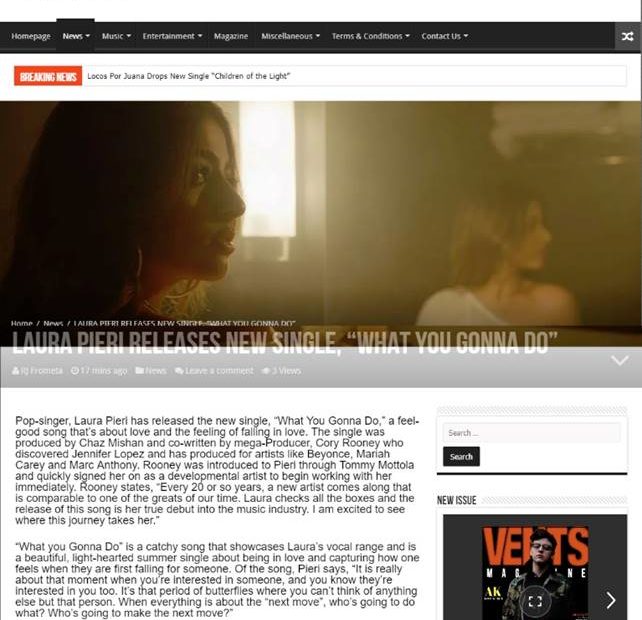 Pop-singer, Laura Pieri has released the new single, “What You Gonna Do,” a feel-good song that’s about love and the feeling of falling in love. The single was produced by Chaz Mishan and co-written by mega-Producer, Cory Rooney who discovered Jennifer Lopez and has produced for artists like Beyonce, Mariah Carey and Marc Anthony. Rooney was introduced to Pieri through Tommy Mottola and quickly signed her on as a developmental artist to begin working with her immediately. Rooney states, “Every 20 or so years, a new artist comes along that is comparable to one of the greats of our time. Laura checks all the boxes and the release of this song is her true debut into the music industry. I am excited to see where this journey takes her.”

“What you Gonna Do” is a catchy song that showcases Laura’s vocal range and is a beautiful, light-hearted summer single about being in love and capturing how one feels when they are first falling for someone. Of the song, Pieri says, “It is really about that moment when you’re interested in someone, and you know they’re interested in you too. It’s that period of butterflies where you can’t think of anything else but that person. When everything is about the “next move”, who’s going to do what? Who’s going to make the next move?”

The video, which will release simultaneously on YouTube, takes the feeling described by the song and pushes the limits… to the extreme! The video follows a couple who look very much together, but things aren’t exactly what they seem. What first appears like a relationship is instead a guy imagining himself with this girl – the object of his affection. The video touches heavily on social media in our culture today and how we can feel like we know someone just because we follow them.

Pieri recalls “sitting down with a friend talking about this person I was interested in and going through their Instagram. I was being super careful not to like any posts, of course, but still delved deep into their page. I played my song for that same friend, and she asked if it was inspired by this person, and even though it wasn’t, the dots just connected at that moment.” The 22-year old singer hopes the video will spark a conversation about social media and at what point are we all vulnerable being that exposed.

While the video concept gets deep about the boundaries of actual romance and perception, the song itself is sweet and light-hearted, mirroring Pieri’s playful side. She hopes that listeners will enjoy it and “maybe even send it along to their crush!” she says.